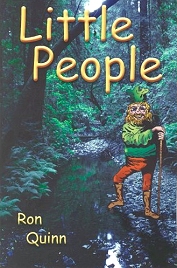 An interesting book chock full of true encounters between the people of the Catskills region and nature folks.

Font type is good
comprehension is average
has many sketch illustrations

I really liked this book. It’s written in down-home manner with thoughts to ponder at the end of each tale.

The 33 stories brim with the essence and aspects of nature folks and elementals running their mysterious agendas and what happened when they crossed paths with regular size folks.

Unfortunately these 3 stories are no longer posted online (as far as I can tell).
Here’s a few short blurbs I wrote for them.
—-
Mr. Quinn’s own encounter happened when he was a boy. He was greeted by an odd looking little man tapping on a window to get his attention and his interaction of observation shared with him.
The little man was about a foot tall, 50ish looking, extremely large eyes, short gray beard on the lower half of his face, silky hair down to his shoulders, dressed in gray shirt, short trousers, crumpled dark hat,boots & wide belt.

—-
Big Bob and the Little Man is a intriguing account of a man who caught a little man of about two feet tall in one of his animals traps. He even held the little man in his hands. Big Bob said that he had no weight at all nor no visible signs of injuries. When Big Bob sat the little man down on the ground, after rescuing him from the trap, the little man ran off leaving his hat behind. The hat was reportedly on display at a General Store during the 1930’s.
The little man was about two feet tall with a short beard, large eye & no eyebrows, dressed in leathery clothes, boots & hat.

—-
Little Girl Lost is about a little girl who was lost in the woods. She was able to find her way back to her Aunt’s house by following what she called ‘two small dolls’. She described them as:
dressed in shiny green clothing, and had small hats and wavy silver hair down to their shoulders.

This site uses Akismet to reduce spam. Learn how your comment data is processed.

Welcome to my blog. This blog is my Speculations on fae, nature folks & elementals legends & lore.
It's book reviews, media and my opinions.
You don't have to agree with my opinions, but I ask that you respect my right to have them.
Thanks for visiting I hope you'll come by again soon.
:)
*I refer to little people, wee folks and beings such as them as 'nature folks'
;)

Unless otherwise stated, the copyrights of all of the contents of this blog belongs to ©terrainwalker all rights reserved.